Recently I was forced to buy a new laptop. Well forced may be a little strong, the hard drive in the Macbook died and since the DVD drive also doesn’t work and it’s 6 years old and won’t even run 10.7 (Lion) or above I decided it was time to for a new one. But Macs are god awful expensive. $1k for a brand new Macbook air with low end hardware. Even used Macbooks retail for more than most new mid range Windows laptops. So instead I went the other extreme and bought the cheapest laptop I could find with a generation 3 Core i3 proc in it. I ended up buying this. An Acer Aspire E1-571 which I also added a Kingston 120GB SSD drive to. With the SSD the laptop is faster than my gaming PC and Win8 boots before the splash screen even has time to make an appearance. I’m not kidding, it takes longer for the BIOS to POST then it does for Win8 to boot.

First, but not included in my list, is Windows 8 is fast. Even on the original 5400rpm hdd bloated with Acer’s apps it ran great and booted quickly. The OS itself is snappy and I’m running on low end hardware. But don’t take my word for it. There are numerous benches showing faster boot times, and performance. Second, all my old apps are working flawlessly. Steam, games, Chrome, Waterfox, Office, remote desktop, etc.

The new Task Manager. Look at that gloriousness. No more third party tools to look at current proc speed, disk IO, etc. No more loading perfmon counters and staring at boring lines. My 9 month old son can read this and know what’s making things slow or just generally how the PC is performing. 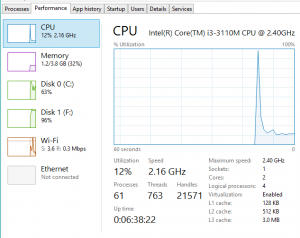 The transfer window. This may seem silly to some, but I transfer files all the time. This new window is f’n awesome. It has a real time graph and it doesn’t seem to calculate the remaining time in Microsoft time. Microsoft time is pulled from the 33rd dimension and due to space time continuum transfer constraints it is wildly inaccurate. 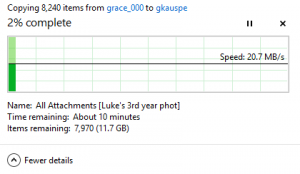 The new search bar (windows key + Q). We had this before in Win7, windows key + type something, however I never used it because the start menu was there and that is what I was used to. Plus desktop and task bar shortcuts which are things I never really liked because I have a horribly cluttered desktop and lots of task bar shortcuts. OS X has their little question mark which I love as well. This is a step closer to something like that, a built-in app launcher. Is it perfect? No, I still have to hit windows Q or windows C to get to search. It would be nice if there was something I could quickly click on with the moused as well. 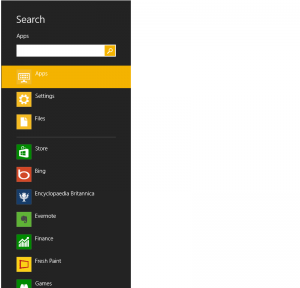 The whole “new look” aka metro style/theme whatever you want to call it in Windows 8. It’s trimmed down, flattened, and simple. It works great over remote connections and on crappy built in video cards. Where as Windows 7 went with a huge graphical improvement (aero glass) that required a fairly decent video card to run, Win8 looks simple enough to run on a phone. Maybe that was the idea since the tiles look like something straight from a tablet. 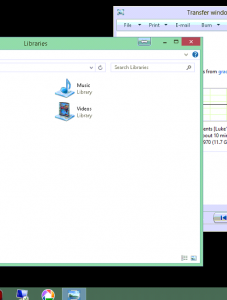 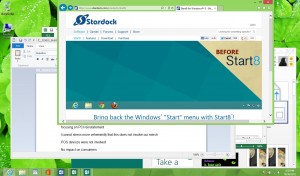 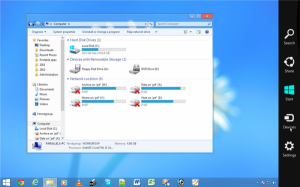 The “Store“. Just like your phone, tablet, and Mac have an app store now Windows does too. Once Steam and Microsoft settle their spat or game developers simply decide to put it in the store, this will be even more awesome. For now though it is a great place to find all the apps I love like Evernote, Google maps, Spotify, etc. Also nice for the family to find some free fun stuff. Anyone remember pinball? 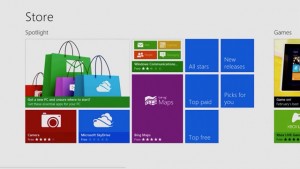 Since we just talked about the store, here is my new favorite app. The Reddit app “ReddHub“. My fix of kittens and Emma Watson will be satiated in style. This is as awesome as the reddit enhancement suite plugin for browsers, but now I don’t need it, or a browser.

The SSD defragger, or trimmer because it’s bad to defrag a SSD. SSD don’t need to be defragged because they don’t have spindles and widely spaced areas to put data like a normal hard drive. In fact defragging can hurt performance, destroy data, and other bad things. Optimizing trims the data that has been marked as deleted or trashed and what not and frees up those blocks. By more horrible explanation you can tell I don’t know much about the science behind this magic, so lets just say it keeps things tidy. An SSD is easily the best upgrade you can make to your PC/laptop so adding this into Win8 is great. Plus right out of the box it’s set to do this once a week. 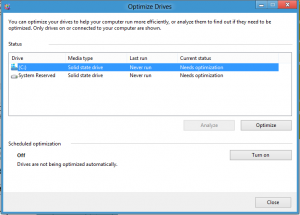 File history – or the new backup. Windows got rid of the standard backup app that let you choose files and save full system images. Before you blow a gasket fellow sys admins, this new backup is even better. It’s continuous data protection with versioning. You can recover files from points in time. Who cares about the registry and system state when they need to recover something? It’s always a document and now Windows 8 can back those up for you automatically. AND, to a network share even on the base edition of windows. With Win7 you need pro or above, home pro wouldn’t let you backup to network shares. It’s also really easy to setup. 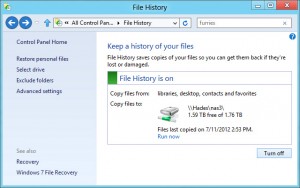 Storage spaces – create RAID arrays from USB drives n stuff. I’ve only briefly examined this but basically it will allow you to create a RAID 0,1,5 array out of drives attached to your system. If this means I can attach some 32GB USB sticks to a USB 3.0 and RAID 0 those suckers for a cheapo SSD, that will be awesome. Also, this is a lot like a cheap disk array or SAN. Theoretically I could use iSCSI target to create some disks on my server and then attach them to my Win8 client and have a protected volume over the network. I’ll have to test this and report back.I’m also not sure if I get all these nifty features in the base edition of Windows 8. 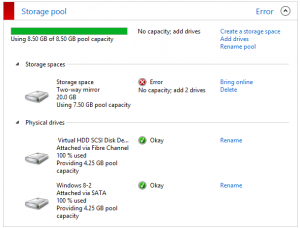 Windows Defender is actually an AV and anti-malware and it’s built in. built in antivirus and anti-malware protection, simple as that. You don’t even need to think about it.This replaces security essentials. 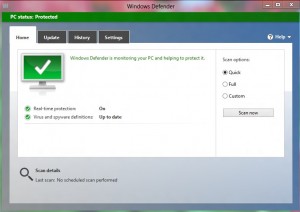 There are something I don’t like as well and it took a good 30 minutes of using the OS to stop thinking about rebuilding my new laptop with Windows 7. I really don’t like the tile interface on my laptop that does not have a touch screen. It’s silly and counter-intuitive but I’ll get used to it. Remote admin tools are not available for the base install of Windows 8. I don’t think that was an issue with Win7 but I could be wrong. I think I’ve only used Win7 home pro once and it was for a gaming PC that I didn’t use for “work”. Also, the product key is embedded in the BIOS. This means the license of Win8 is attached to this laptop. I can’t install Win7 and use that license on another piece of hardware. I find this a kind of devious licensing model, but MS has to make gobs of money and this is a pretty good way to prevent piracy.

Overall I am impressed. This is not another Me/Vista as I thought it would be with the radical change in design. However, I am in IT and I work with this stuff every day, so my learning curve is pretty small. I took a few minutes to run over the basics with my wife after I learned them and she seemed to be able to get around just fine as well. She’s also forced to learn keyboard shortcuts :). but my wife is using it to check email, facebook, and other general tasks. So I don’t count her subjective opinion as a valid test.

For anyone thinking about upgrading, test it out first at the store. If you really can’t stand it you can still put Windows 7 on your new PC/laptop and be fine.

This site uses Akismet to reduce spam. Learn how your comment data is processed.

Need better and less expensive cell phone service? Sign up with Ting using my referral link. We both get $25. My average monthly bill is less than $27 and I've been a customer since 2012.

$25 off a new device or as Ting credit